Agra is on the itinerary of many tourists who visit India. Home to one of the Seven Wonders of the World, the Taj Mahal draws countless crowds to its unparalleled magnificence. Despite having visited the mausoleum four times - twice in the last several weeks accompanying first my sister and then with friends - I’ve yet to feel satiated by the splendor of this monument of love. Built by Shah Jahan to honor his favorite wife after her death, I think his touching testament, to a large degree, is what swoons us when in the presence of this mystical palace.

Not far from the Taj is another testament of love. Though this one, for me, is even more monumental - The Agra Bear Rescue Facility. After reading about their rescue of “dancing” bears, I scheduled a visit to meet with them to learn more about their work in an effort to help raise awareness.

The first time I visited Agra I witnessed the dance of a bear who was made to perform as soon as the kalandar  - its trainer - saw our van approaching. He swiftly tugged the bear up from its sitting position forcing it to stand on its hind legs to dance for us. I was glad that our driver did not ask if we wanted to stop, watch, photograph, and pay the kalandar for the bear’s feat. The exhausted looking bear, struggling to stand fast enough for the likes of its master, dropped down apathetically when the man pulling on its rope like a puppet on a string, realized he wouldn’t be getting any money from us. Despite the briefness of the sickening display, it lasted long enough to indelibly etch the incident into my mind.

Fortunately, with the tightening laws - thanks to the work of Wildlife S.O.S. in collaboration with the Government of India and the Uttar Pradesh Forest Department - dancing bears are seldom seen by tourists anymore. The three-century history of the dancing bear can be traced to the Mughal empire where they were used to entertain royalty. Of the some 1200 bears still being used to “entertain”, most of them are being toured through villages where locals are fed superstitions about them. Their fur, taken from the bears to make and sell rings, is assured to bring the wearer good luck.

I met with Dr. Raja, one of the veterinary doctors who works at the Wildlife S.O.S Agra Bear Rescue Facility. While walking around the sanctuary and seeing the rescued bears at play, he spoke about the exploitation that they’ve suffered and what they are doing to rehabilitate them.

The first bear we encountered was Laloo Maharaj. A serene bear with sad eyes and a silvering muzzle, he was the only one that I was given permission to photograph. The others, Dr. Raja informed, would associate my camera with their days of performing, causing them anxiety and stress. Eighteen year-old Laloo, the oldest bear at the facility and one of the first to be rescued, has his own private quarters, preferring to be on his own. His snout retains his painful past, a scarred hole where he was commanded from a short, coarse rope.

The muzzle of the bear cubs - who are kidnapped from their mothers when less than a month old - is pierced with a red hot poker where the rope is passed through. The life of a dancing bear is controlled from the length of that rope, generally only four feet long. The muzzle is re-pierced on a regular basis to keep the wound fresh, never allowing it to seal. 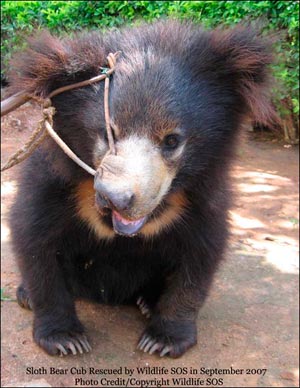 Tribals are paid to help the poachers steal the cubs from their mothers. The cub’s mothers are often killed in the process. Eighty percent of the poached cubs die before six months of age. The male cubs, once in custody of the kalandar, are crudely castrated with a razor; no anesthetic is used. Many die after castration due to trauma and from septic wounds.

I kneeled down to get closer to Laloo, feeling the prick of the solar-powered electric fence that separated us. I spoke softly to him, reassuring him what I’m sure he knew, that he was safe now, never to be abused again. The story of his past, reflected in his sorrowful eyes, still troubles me, but I am relieved in knowing the exceptional care that Maharaj is receiving at the sanctuary. 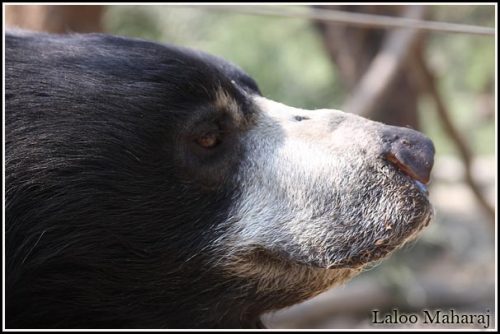 There are three other bear facilities, in Bangalore, Bhopal and West Bengal. Agra is a lifetime facility; to date they have rescued 469 Dancing Bears. Happily, of those cubs living in Agra, 12 of them were rescued from poachers before they were made to perform. Ten others, housed together on their own, were not so fortunate. They are blind, either from their imprisoning rope being pulled across their eyes or from the lashings they received with sticks that struck their eyes.

Another group of younger and more lively bears seemed nearly oblivious to their past, merrily roughhousing, shaking trees, and enjoying their freedom. One of the bears was weaving back and forth, stereotypic behavior leftover from its dancing days. For this condition the staff is using enrichments that mimic the bear’s natural habitat to help re-pattern and stimulate their brain.

When the bears first arrive the sanctuary they are given from one week to ten days to relax and adjust. This period is needed to allow them to feel safe and to help build trust with their keepers. The first goal is to make them comfortable. Once this is established the rope from their nose will be removed and their wounds cleansed to begin the healing process. They are quarantined for a period of three months. The cubs that are brought to the facility are put into a special area in which their natural habitat has been recreated. They receive their nourishment from a kitten milk replacement formula.

The next step is a comprehensive health checkup in which the bears receive an examination of their teeth, muzzle, eyes, claws, and reproductive system. Their canine and incisor teeth are often damaged and broken by the chisel and hammer used to try and remove them. Most of the bears have infection in their teeth which prevents them from eating, leading to death by starvation. Many have not been properly fed and have had to scavenge for food. Dr. Raja showed me jars containing objects that have been extracted from the intestines of the bears, including cigarette butts, garbage, worms, and hairballs. Another common problem seen in the bears is with their peritoneum/abdominal cavity muscles. When they jump up to dance all of their weight must be supported by their hind legs putting excessive pressure on their abdominal muscles.

An important part of the work of Wildlife S.O.S. is in the rehabilitation of the kalandars. For their peaceful surrender of the bear, a generous rehabilitation package of start up funds amounting to 50,000 rupees (approx. 1250.00 US) is offered, allowing them to start a new, legal livelihood. Wildlife S.O.S. helps in the facilitation and monitoring of their training, pays for the education of the kalandar’s children (assisting with school fees, uniforms, text books, et cetera, totaling about 2000.00 US), and helps the women receive vocational guidance (weaving and sewing skills) towards self-sufficiency for the entire family. Kalandars can choose new professions such as rickshaw drivers, grocers, tea shop wallahs, tailors, welder-fabricators, kabadi wallahs, and carpet weavers. Eighteen former kalandars are employed at the Agra Bear Facility.

As we were leaving the sanctuary a group of enthusiastic school children were arriving. Education is a paramount tool in teaching that bears are not for our entertainment value and using them in this manner causes them to suffer dreadfully. In our knowledge of this we can do our part towards the complete eradication of the problem.

To learn more about the rescue of the bears, as well as Wildlife SOS’s work with several other species of animals, visit their website at Wildlife S.O.S. Or, if you’re making a trip to Agra, consider putting them on your itinerary. Your donations will help in the rescue of the bears that are still at large, and support the continued care of those who are now living their lives in the tranquility of the Agra Bear Rescue Facility. Also check out The Last Dance a short video from the Discovery channel on the plight of the dancing bears.

Donations can be made online through the Wildlife S.O.S. website, or by personal check or bank draft sent to: