I was afraid they may not return, with little to return to. The ice storm in December tore limbs from the trees, and with them, the nests of blue herons. When I went to survey the area about six weeks ago, I found two of the nests. One of them was completely intact as if it had been plucked from the branch and placed onto the ground. The other had been a bit flattened by the fall, looking like a messy pile of twigs.

The intact nest was like an intricate woven piece of art that I tried photographing, but, even from several different angles, the photos failed to show the depth of it. I picked it up to try and get a sense of its weight. It was densely heavy. On the very top of the nest, tangled within the twigs, was a few feet of fishing line that some careless person had left behind, a nesting material some birds use that can be injurious or even deadly to them.

Upon my return to the rookery a few days ago I was elated to see cottonwood trees alive with herons. The two nests that survived the storm were occupied, another was being created. I counted four mated pairs. Standing beneath the towering, bare-leafed trees on the muddy, branch-scattered terrain, I felt as if I had been transported to a different world. Herons alighting from branches floated through the late day blue sky. In the nests were herons sitting silently atop eggs. And the most delightful sight, one of the bonded pairs was building their nest together.

The male heron is in charge of collecting the twigs for the nest. I watched as he flew off several times in search of the next sprig, diligently tugging at the tree until it let go. 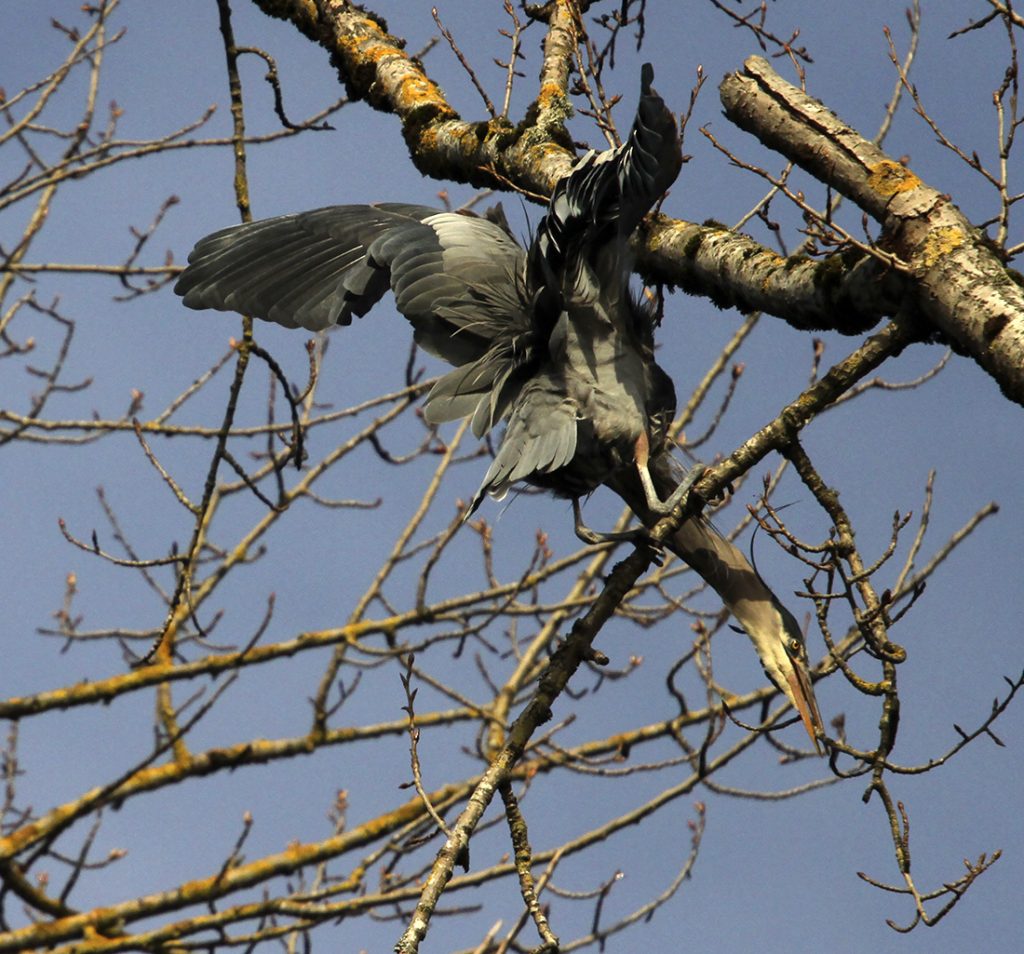 He'd fly back to his waiting mate, squawking as he neared the nest. She would sometimes squawk too, as if to say 'hurry', maybe due to the setting sun and the approaching nightfall. He'd give her the twig; she at once began weaving it into the nest while he stood for a brief period, looking off in several directions before going off in search of another. 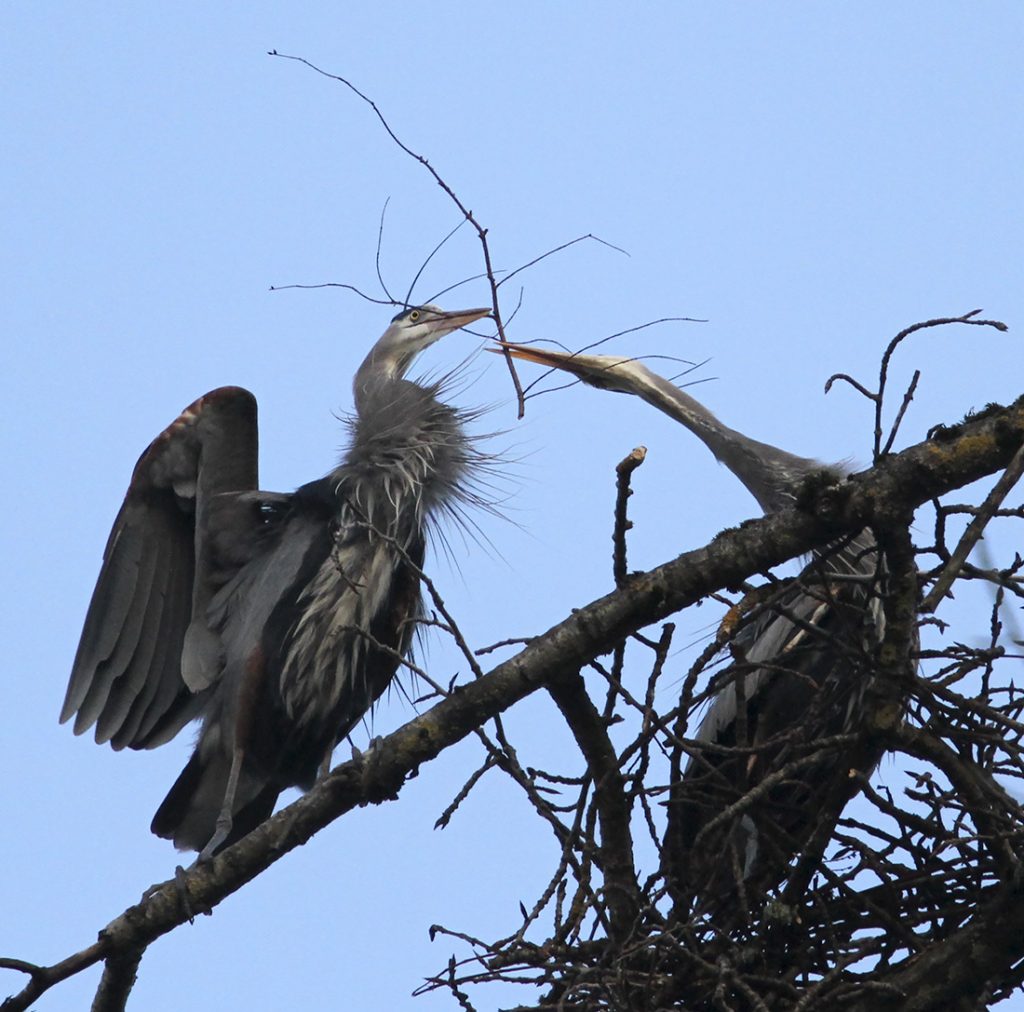 The cooperative dance between the pair was joyful to watch. I wish I could hang out with the herons everyday to witness the evolution of the nest, to see how long it takes to create a suitable home for their young. One brief mating interlude occurred between twig fetching and nest weaving; baby blue herons are in the near future! 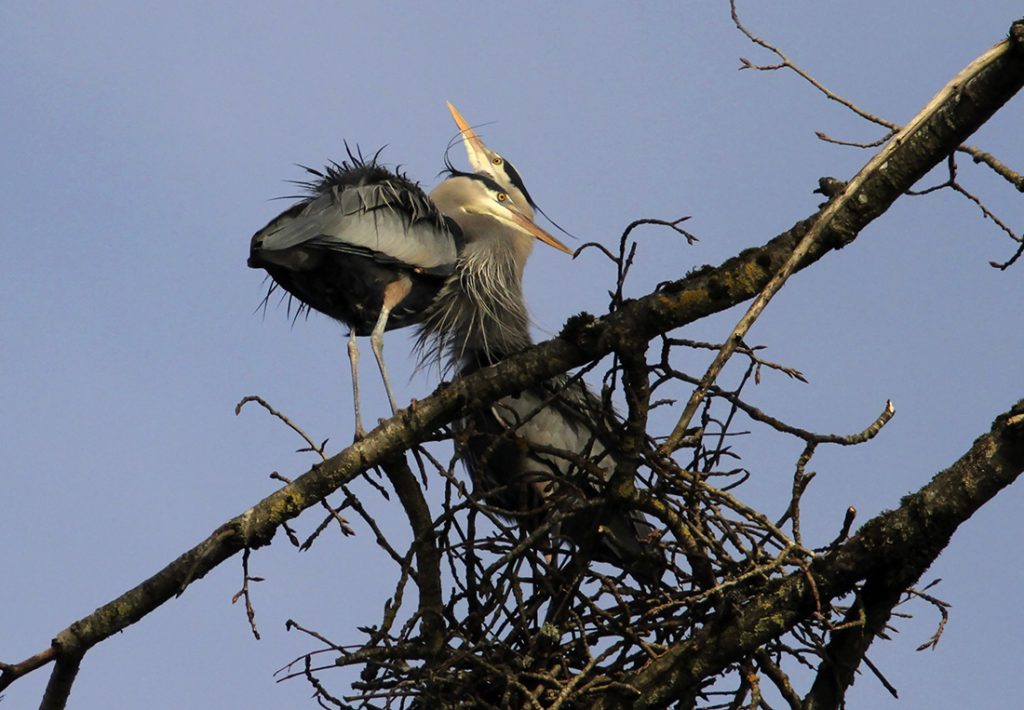